Robert Hill hasn’t stopped smiling thanks to his newfound confidence and independence since joining the NDIS in August 2018.

Robert, 31, has vision impairment, microcephaly and autism and over the last eight months his vision has further deteriorated.

Prior to the NDIS, Robert was isolated from the community and relied solely on his mum Kim for everyday support.

“It was just the two of us for a long time, everything was self-funded on one household income, so it was impossible for us to go anywhere,” said Kim. “I had no support or respite aside from four hours on a Friday night when a support worker would take Robbie to the shops,” she said.

Robert and Kim worked with Brotherhood Local Area Coordinator Janet to develop his NDIS plan. According to Kim, the support they received from Janet removed any uncertainty she had about the NDIS.

“Before the NDIS, I never knew there was help available,” said Kim. “After Robbie’s planning meeting I could see the potential that this could really help us, and it has,” she said.

Now, Robert receives daily carer support and is confidently taking part in activities in the community.

“The NDIS has opened up his world, he’s a different person and is now happily accessing the community with his carer,” said Kim. 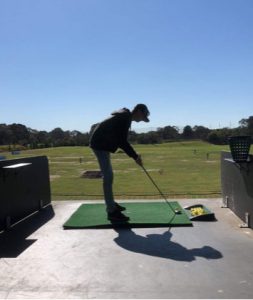 A keen basketballer when he was young, Robert is now reconnecting with his passion for sport, joining a sailing group throughout summer, playing golf and joining a local bowling league as part of his men’s group.

Robert has also discovered a talent for baking through weekly cooking classes, bringing home sweet treats for his mum and step dad, Tony.

“Last week he brought home a batch of cookies that tasted just like the Subway ones!” Kim said.

“It’s incredible what he’s accomplished. People who knew Robbie before the NDIS can now see the massive impact it’s had on his life. Before, if visitors came to the house he would just stay in his room, now he’s out and talking to people,” she said.

Robert’s increased confidence and the support of his trusted carer has allowed Kim to go out more with friends and enjoy weekends away, something she would never have dreamed of doing before the NDIS.

“I don’t have to worry about him anymore, I’m so proud of him and all that he’s accomplished,” Kim said. “Robbie is now safer, confident and independent, the three things I always wanted for him,” she said.

The Brotherhood of St Laurence is the local Partner in the Community in the delivery of the National Disability Insurance Scheme (NDIS) across the North-East Melbourne, Hume Moreland, Bayside Peninsula, Western Melbourne and Brimbank Melton areas.